Underzone is the debut title from independant studio Strike Game Labs, a science fiction rogue-lite that puts players in control of The Mole, an off world drilling mech that has been re-purposed for a search & rescue mission that takes place deep below the streets of a futuristic London. With the city left devastated following a national disaster, players must pilot their mole deep into the Underzone, a sprawling network of tunnels and factories, to rescue the trapped survivors.
I worked with the studio as the Lead 3D Artist and was responsible for the creation of characters, environments, props and animations and their implementation into Unity.
The following page shows the creation of the main playable character The Mole.  Follow this link to view some of the environments created for the game.

Creating the games main character was a big challenge technically as the game design required for the character to be playable in several states: a bipedal form, a flying form and a digger form with real time transformation animations to each on screen. Additionally each of these states also required unique traversal and combat animations as well as various weapons and upgradeds and the ability to open up to allow human passegners in and out of the machine. These considerations informed every factor of its creation from the model to its rig and animations and setting up the animation states in Unity.

Original 'Mole' concept art by Matthew Beakes. The legs were redesigned by myself during the 3D production stage to allow for the design directors vision of bipedal walk animatons. The thrusters/ counterweight on the back were also redesigned during 3D production to make the circular drill segment more streamlined. 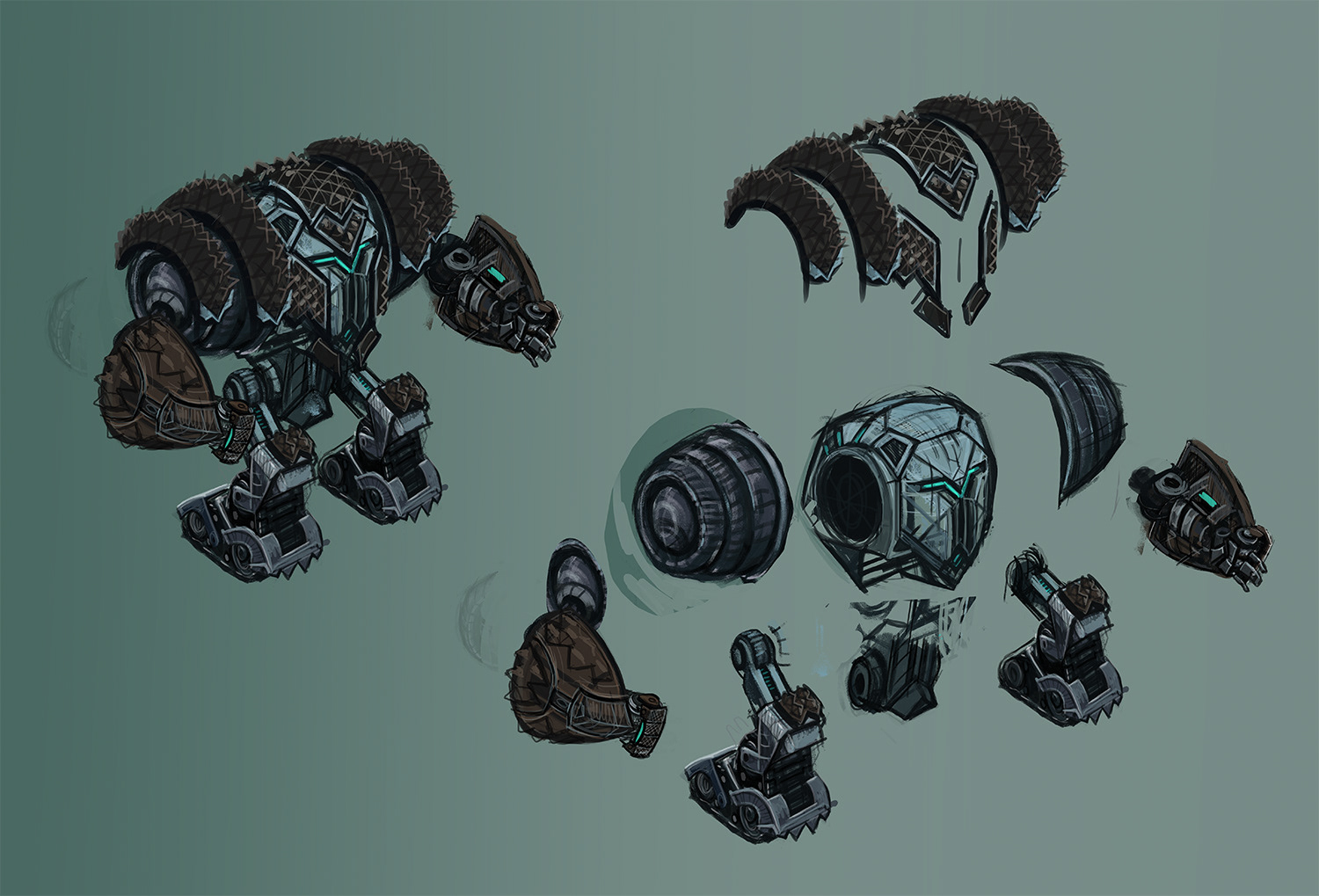 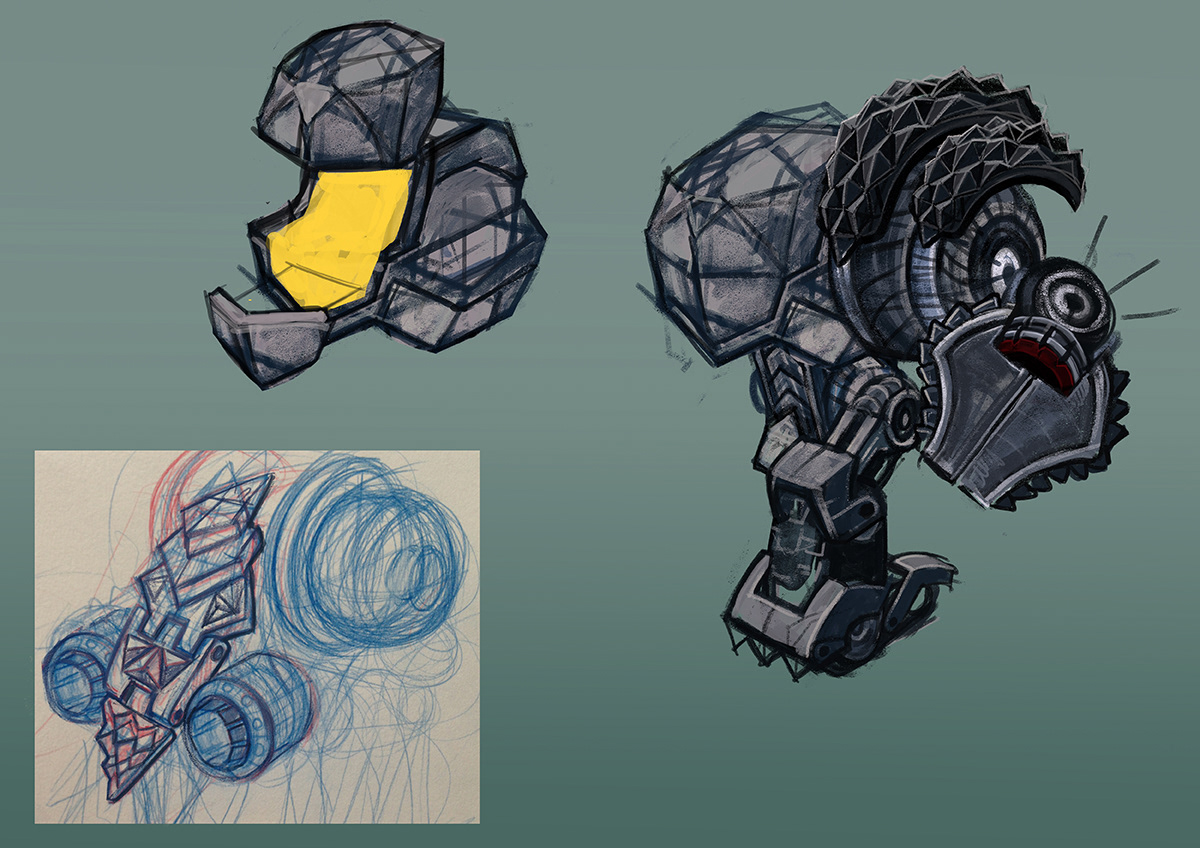 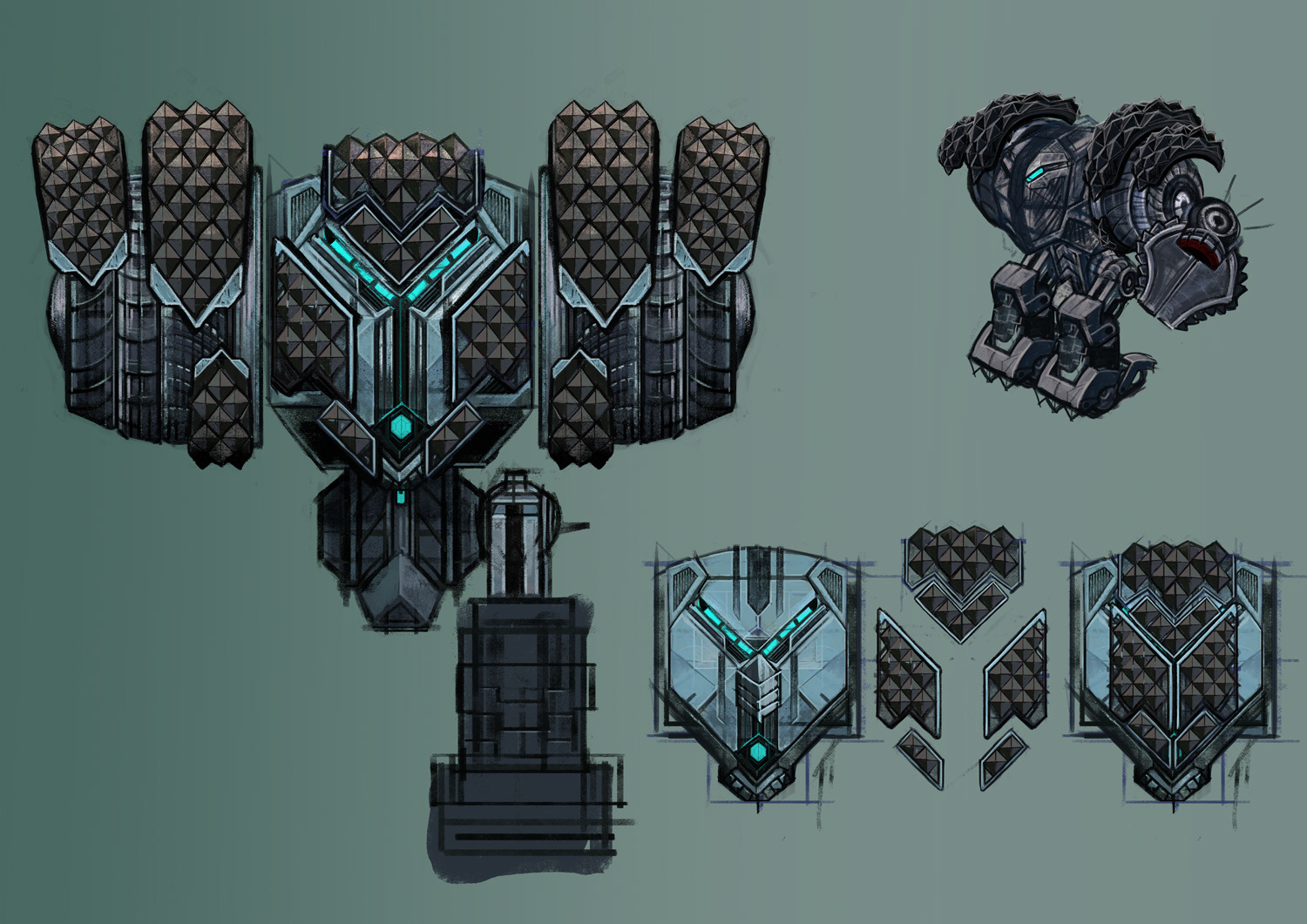 Working from original concepts created by artist Matthew Beakes, The Mole was the first asset to be created for the game. It was modelled, rigged and animated using 3Ds Max with texture baking and creation taking place in XNormal and Quixel Suite.
During the 3D production phase various details of The Mole were changed from the original concepts based on the changing scope of the game. The original 'caterpillar tread' feet were replaced with inverted bipedal legs to create walk cycles and movement that would make the character feel heavier and more machine-like instead of skating along. The back thrusters were also replaced with a much smaller system to prevent breaking up the central track that would become important during The Mole's transformation and digger mode animations.

Once 3D production was at a usable stage, the character was brought into Unity. PBR materials using Specular Workflow were set up as well as character specific particle effects including light trails for the thrusters, exhaust fumes and flame and muzzle flashes for the weapons. A mecanim state machine was also created to drive the characters animations and blend between its various transformation and combat states.

Scene captured in Unity 5 with all in game assets.

Combat was designed as a twin stick mechanic with the left control stick driving movement and the right controlling direction of the characters arm for aiming. Multiple, upgradeable weapon types were needed for the character including a machine gun, flamethrower, rocket launcher and club for melee attacks. Concept art for this system placed the various weapon types inside an all in one wrist mounted pod. This system helped sell the idea that The Mole is a complex machine and adding animations to this area was great fun!

The final weapon system as seen on the game asset.

Combat Animation Set. The animations were blended with arm positional animations in Unity so that the player could control the direction of the Mole's aim.

As the game is a rogue-lite, players spend much of their time tunneling through the earth exploring and exposing new procedurally generated 'rooms'. To allow for this traversal mechanic The Mole can transform into a digging machine, bending and shifting its mechanics to become a formidable spinning disk. These transformations were among the most difficult animations to create and rigging The Mole so that everything could move and rotate was a huge challenge!

'The Mole' in digger form. Concept art by Matthew Beakes. The central area was made thicker in the 3D stage to allow for the body to be completely covered during the transformation animation. The counterweight at the back was also made bigger to hold a storage container on the back of the character.

'Transformations Animation Set captured in 3Ds Max viewport. These animations are used whenever a player exits or enters a room.